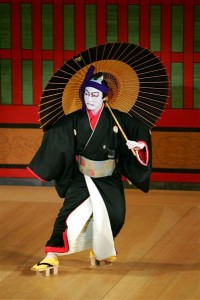 Kabuki is one of the major types of classical theater in Japan. It was developed as a form of popular entertainment for common people in the Edo period. The history of kabuki began in the early Edo period when Izumo no Okuni, possibly a miko of Izumo Taisha, began performing a new style of dance drama.