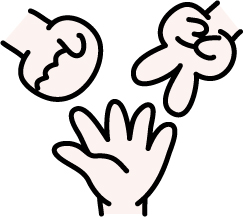 Janken is played to decide who goes first, how to choose turns, or who will be "it" in a game of tag. Janken is a one-handed gesture game with three different signs which represent rock(called gu in Japanese), scissors(choki) and paper(pa).


Everyone has to make one of those three signs at the same time after shouting "Jan-ken-pon!" Rock wins against scissors, and scissors wins against paper, and paper wins against rock. When everybody makes the same sign or when there is at least one of all three signs shown, it is called aiko or a draw and everyone tries again until someone wins.