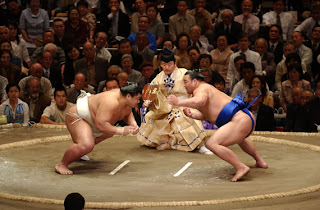 Sumo is the national sports of Japan. Two wrestlers wearing only loincloths, fight in a sumo ring. Each match is over very quickly. One wrestler wins when he pushes his opponent out of the ring or forces him to touch the ground with any part of his body.

These are 700 sumo wrestlers, in ascending order of the ranking system, zyonokuchi, zyonidan, sandanme, makushita, zyuryo, komusubi, sekiwake, and ōzeki. At the pinnacle of the ranking is yokozuna. Six great championships are held every year. The bout lasts for 15 days.