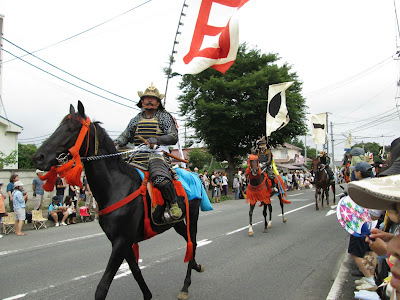 Samurai were the military nobility of medieval and early-modern Japan. In Japanese, they are usually referred to as bushi. When battles occured, Samurai had fought wearing ō-yoroi armor.

Origin of the samurai appeared in the early Heian period. They had served the nobility as mainly guardian and warrior. When it comes to the late Heian period, Taira clan (Heike) was led by Taira no Kiyomori has a mighty armed, samurai class came to the fore rapidly. After that Heike was destroyed by Minamoto clan (Genji), and then Minamoto no Yoritomo leader of Genji was awarded the title of Shōgun by the Emperor (Ten’no), and opened the Kamakura shogunate (Bakufu). Since the Bakufu was opened, Shogun house seized the regime while controlling the nobility. After this, also subsequent Shogun house changed, this political form lasted until the mid-19th century.

Although samurai no longer exist in modern Japan, you can see role-playing paerson as a samurai in traditional festivals and events.