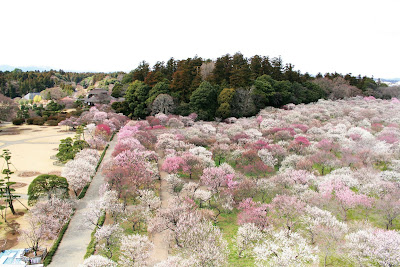 Prefectural capital:Mito City
Industry is thriving in Ibaraki Prefecture. There are many electrical and mechanical plants associated with the multinational conglomerate company “Hitachi” in Hitachi City where is the birthplace of the “Hitachi”. In addition, steel and petrochemical plants are concentrated in Kashima City where is hometown to the football team “Kashima Antlers”. Tsukuba Science City in Tsukuba City has been carried out advanced research to represent Japan.

“Kairaku-en” in Mito City is the famous garden which was built by the Mito Domain. Kairaku-en is most attractive during the plum blossom season. The Mito plum blossom festival usually takes place in late February and March. Besides the plum tree forest, where one hundred different plum tree varieties with white, pink and red blossoms are planted. In agriculture, the production volume of green pepper, lotus root, melon, bok choy, chestnut and natto is the first in Japan.